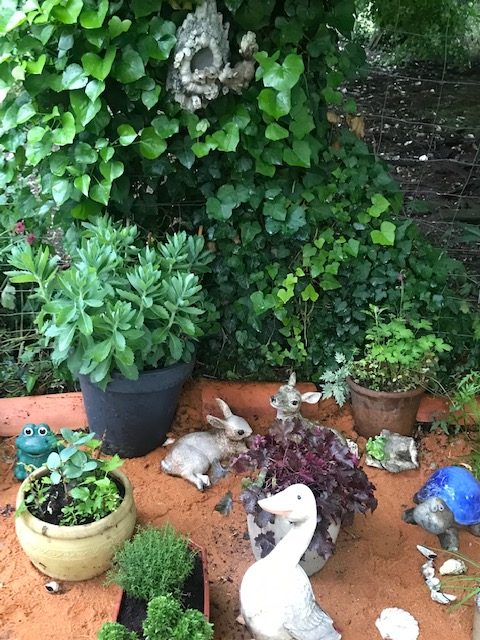 Animals in the Garden

Ascribing human qualities to inanimate objects is called anthropomorphism. As my mother got older she collected garden ornaments, which fall into this anthropomorphic category. I have now inherited these once cherished objects and find it difficult to part with them, because for me they are imbued with subjective human emotion instead of retaining their original objective materiality. Anthropomorphism is generally associated with innocuous positive feelings such as cuteness, enablement and a sense of responsibility. However, it is also linked to psychological issues such as an anxious attachment to objects that can lead to hoarding. 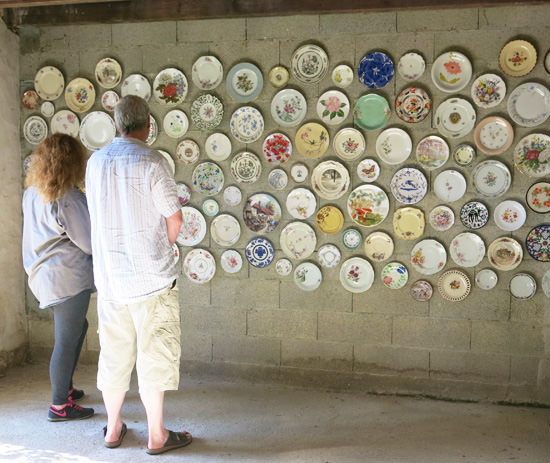 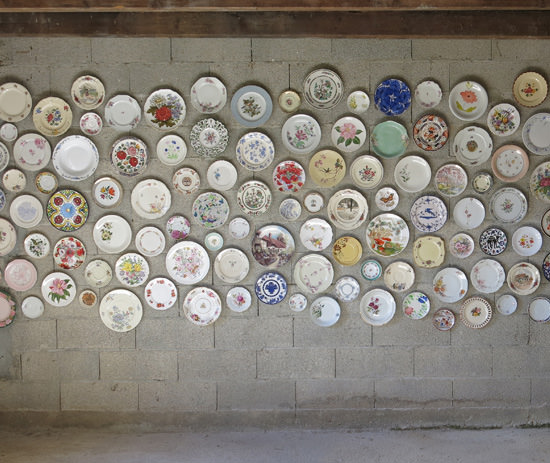 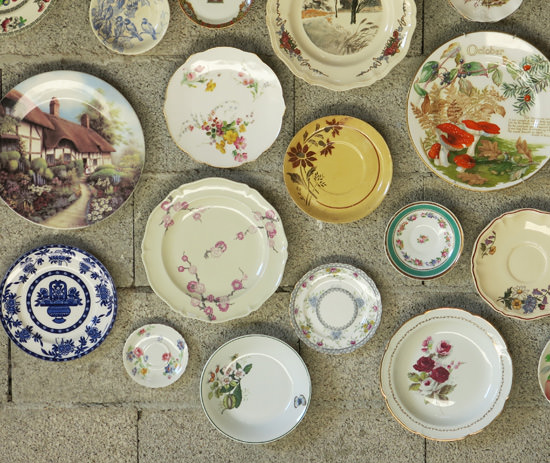 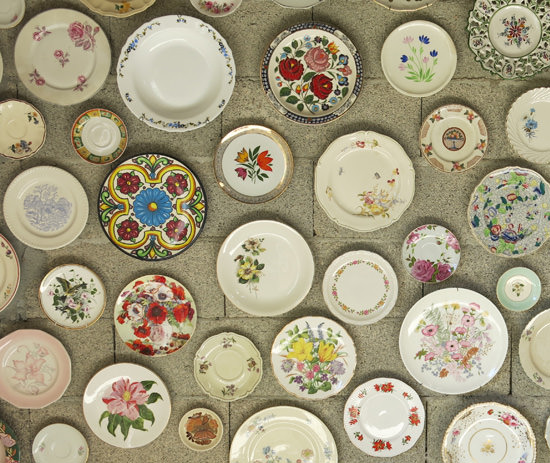 Flora, a project initiated by Myfanwy Johns and set up in collaboration with Joss Burke.

In Roman mythology Flora was the goddess of flowers and of the season of spring. The art of translating and interpreting flowering vegetation onto a ceramic surface has been practiced for centuries in different cultures and regions throughout the world.

The collection of plates on display has come about through a very similar activity to gardening: it has included seeking, locating, acquiring, organising, cataloguing, displaying, maintaining and storing. As with plants, friends have been involved in gathering the 100 plus plates covering the wall. The plates are carefully placed to reflect the close planting of a British cottage garden, where random planting is essential to create a complex pattern of texture and colour. Individual plates rather than matching sets have been chosen as an insight into the range of approaches given to decoration.

The decoration intrinsically holds intimate traces of private lives, where memories have been evoked “like my Grand Mothers plates”–“I have one like that”–“we had a similar service when we were first married” They are everyday objects we live with and use.

Interestingly, company stamps on the rear of the plates reveal information about their countries of origin, some of which no longer exist i.e. Czechoslovakia. Other stamps include both French and British factories, such as Gien, Worcester, Limoges and Wedgwood 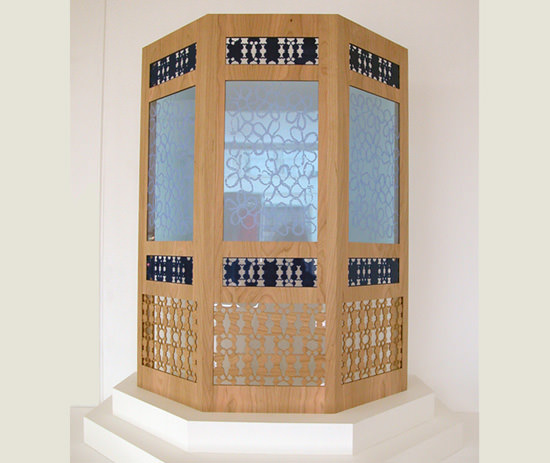 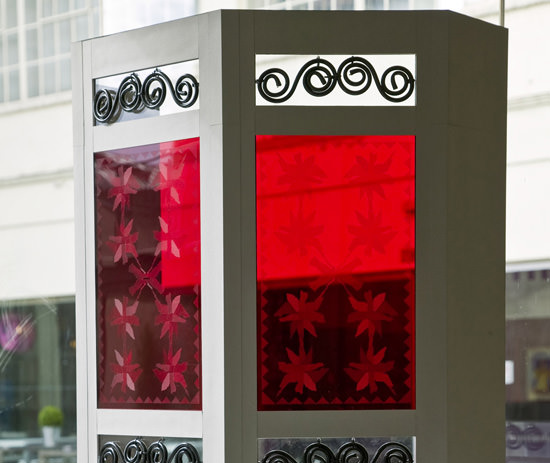 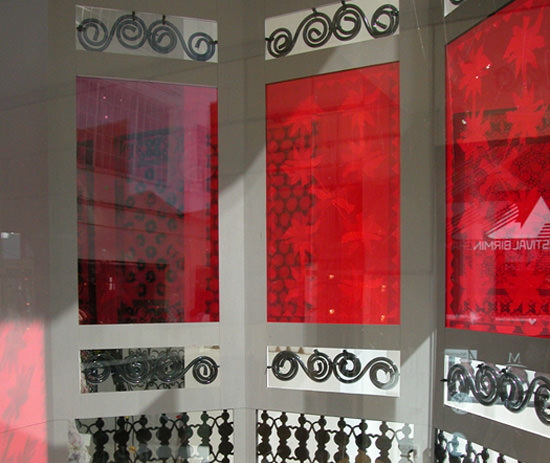 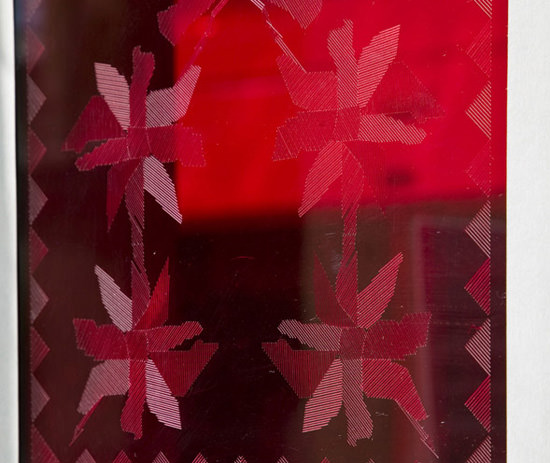 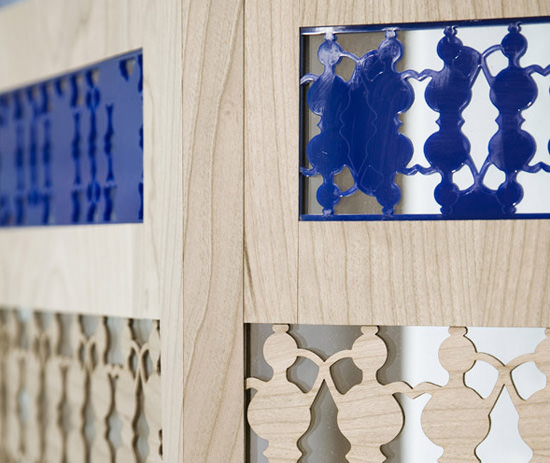 Led by artists Françoise Dupré and Dr Myfanwy Johns in collaboration with architect Sabina Fazlic and participants from the Bosnian Cultural Centre-Midlands (BCCM). Project B: Sebilj, is a Birmingham-based transnational collaborative public art community project referencing the functionality of ornament and its transformative quality on architectural space.

Between November 2007 and June 2008, participation, dialogue and interaction lead to a proposal for a contemporary interpretation of Sarajevo’s Sebilj (the famous public fountain and kiosk shaped landmark in Sarajevo). Traditional craft techniques and Bosnian design were transformed through digital technology into concepts for architectural design. Sebilj was exhibited as part of the New Generation Art Festival in 2008. 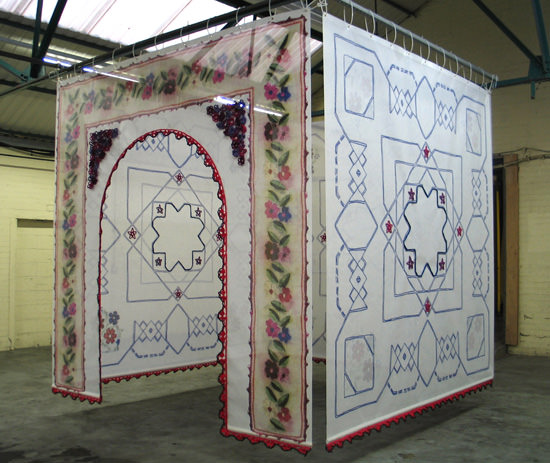 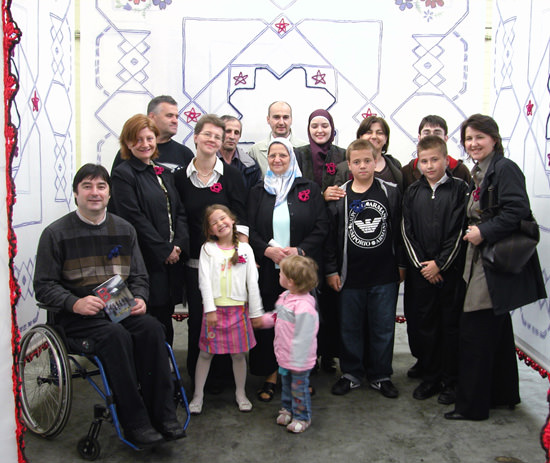 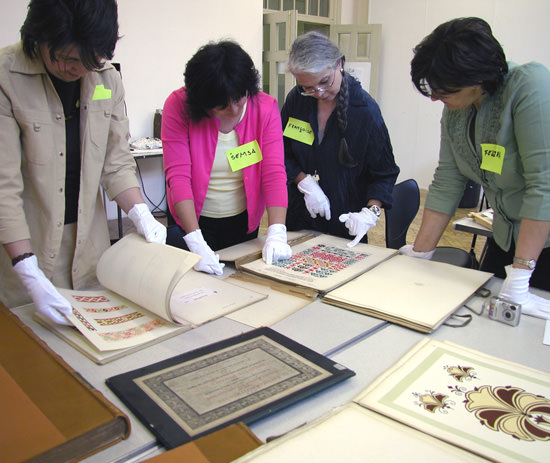 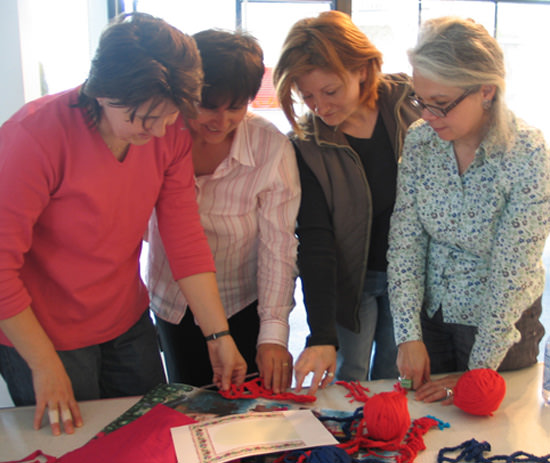 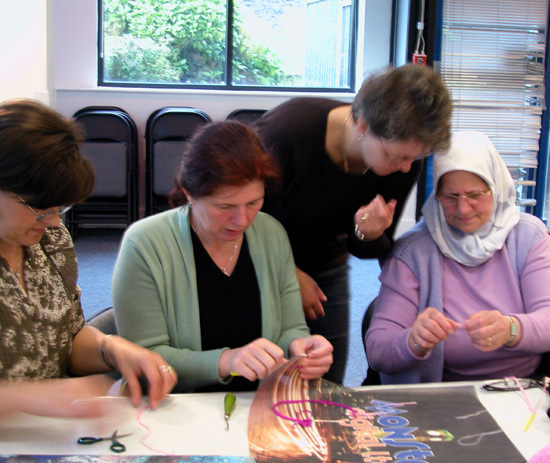 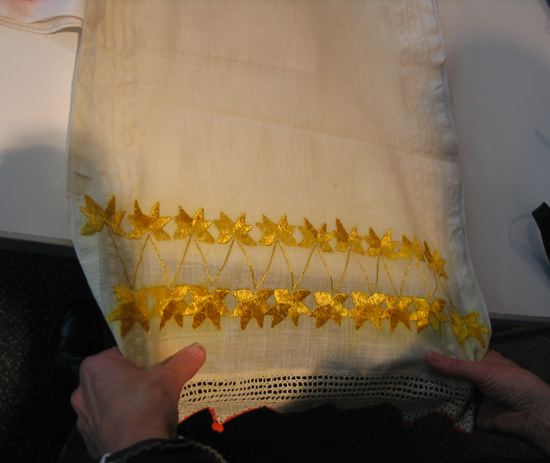 An installation based on the courtyard garden space of a traditional Bosnian Muslim home.

A collaborative architectural community project working with fellow artist Françoise Dupré in collaboration with architect Sabina Fazlic and participants from the Bosnian Cultural Centre-Midlands (BCCM) to create an installation that referenced traditional Bosnian craft and design within an architectural environment – avlija was exhibited for Architecture Week and New Generation Arts Festival 2007. 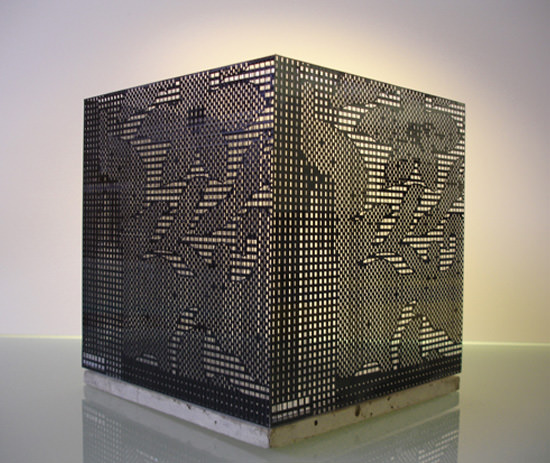 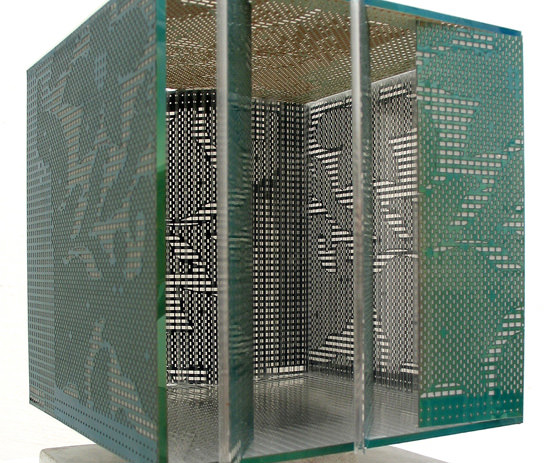 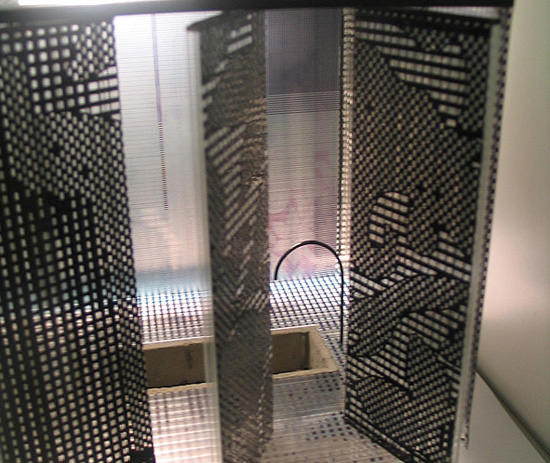 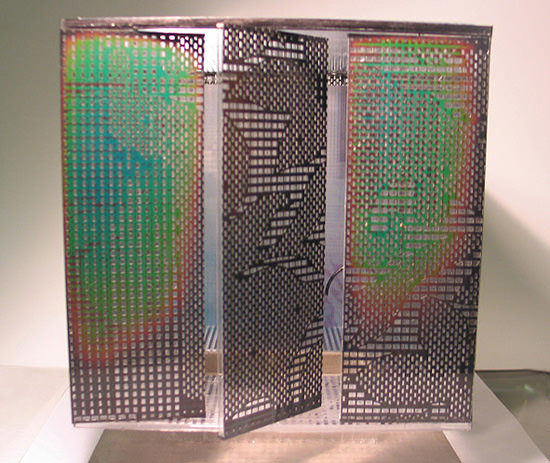 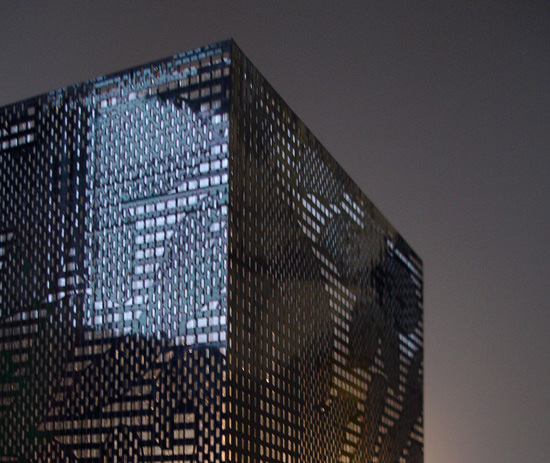 Shadow Hut interprets the vernacular beach hut through exploiting its structure, format and skin. Pattern is applied to the surface as a means of defining territory. Just as animal patterns are used as a form of identification and camouflage.

The exterior pattern is created from a thermo-reactive surface that changes colour by applied and reflected heat. The beach-hut becomes an interactive artwork-changing colour by the tactile actions of people and environmental conditions through the seasons. The translucent surface allows daylight to softly permeate the interior of the hut, the pattern offering solar shading. At night the hut becomes a lantern, the pattern becoming a silhouette on the surface.